Faculty Q & A with Brent Aucoin 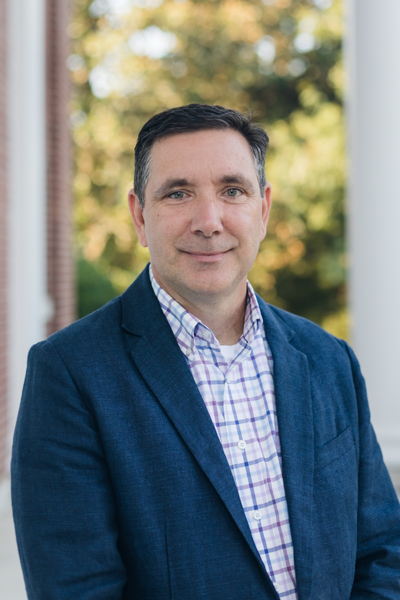 Q: Tell us about yourself.

A: I’m originally from New Orleans, Louisiana. I was raised Catholic and went to Catholic schools growing up. I attended Louisiana State University to study journalism. Eventually I changed to history, headed off to Miami University in Ohio for my master’s, and the University of Arkansas for my doctoral studies.

I became a believer shortly after I met my wife at the University of Arkansas. She also has her Ph.D. (she’s a Russian historian). We’ve got four boys, one of whom we recently adopted out of foster care.

Q: How did you come to SEBTS?

Q: When people ask you, “What do you do at Southeastern,” what is your response?

Q: On what are you currently working?

A: I am in the final stage of my second book. I’ve got to do some more reading and interact with some more of the literature.

The book is a biography of an Alabama governor who was a Confederate veteran. As a governor and judge he took some courageous positions in support of African-American civil rights.

Q: What have you been reading recently?

Q: When you get home from work, what do you look forward to doing?

A: The main thing is playing with my boys. I used to have other hobbies, but those are long gone for the most part. I like to stay active and be active with the boys. We’ll throw the ball, play in the tree house or do something else outside. I also like reading with them and supplementing what my wife does in homeschool.

Q: Who are your role models?

A: The first role models I can think of are some of the first Christians I knew when I became a believer in graduate school. I definitely can point back to some of those people as role models for me, and as people who played a significant role in my early growth as a believer.

My pastor, Andy Davis, is one of my role models as well as laypeople who exhibit love and godliness.

Q: What has God been teaching you lately?

A: God is reminding me of my self-centeredness, particularly in relating with my family. I’ve been convicted by times when I’ve not been godly in my response to my children.

Q: Where are some of your former students?

Q: When a student completes your class, what do you want him or her to walk away with at the end of the semester?

A: From an academic standpoint, I want to surprise my students and expose them to things they didn’t know before. Secondly, I’d love for them to see the apologetics side of history and how it relates to the Word of God and what it has to say about the world.

Q: We always say that every classroom at SEBTS is a Great Commission classroom. What does that look like for your class?

A: In my classes I emphasize that we can learn lessons from history that teach us about what it means to be a Christian and how we ought to live our lives – particularly the need for those in the world to hear the gospel.