At the Office with Dr. Chuck Lawless

Dr. Lawless doesn’t just teach about prayer; he models it for his students.

For the past 47 years, Lawless has prayed for his own mother to surrender her life to Christ. And he has watched God answer decades of unrelenting prayer as she gave her life to Christ this past spring at 79 years old. In fact, you can find a photo sitting on his office shelf of him hugging his mom right after baptizing her.

The items in Lawless’ office aren’t just things to fill a space; they’re symbols of his Great Commission ministry to congregations, students, and missionaries throughout the years. He has photos of students and their families he’s invested in. He even has a stuffed bear covered in the Armor of God that was gifted to him by the first college class he taught on spiritual warfare. He has items like an East Asian prayer mat hanging on his wall to remind of him of the steadfast prayers of the East Asian believers to whom he has ministered. A little something people may not know about Lawless is that he actually served as a volunteer firefighter while living in Kentucky.

As the Dean of Doctoral Studies at Southeastern Baptist Theological Seminary (SEBTS) Lawless is continuing to help students see their place in the mission of God. The holder of the Richard & Gina Headrick Chair of World Missions and Evangelism, Lawless took the time to discuss a variety of topics from his 30-year marriage to his wife Pam, his love of travel, how he ended up in ministry, and so much more. Check out the conversation below.

What do you and your wife like to do for fun?

We really enjoy travel. Most of our travel has been more with the International Mission Board.  I was traveling three to four times a year with the IMB before the pandemic, and Pam would go with me as much as she could. She’s probably been with me for two thirds of the trips. She loves travel as much as I do, and she loves missionaries. To get to minister to them and love on them–she jumps at the opportunity. When we travel just for the fun of it, we often go to New York City. I love the internationality of that city.

How did y’all meet?

I was pastoring a church in the same area where she was going to church, and her church secretary and my secretary decided we needed to meet. We met at a Christmas party for her singles group. We’d been dating for about a year and a half, and we were in my church office one night and I just said to her, “Do you want to get married?” She said, “Sure.” We literally got my calendar and found the next free weekend. That’s when we set our wedding date. We actually got married five weeks after we got engaged. In fact, I was scheduled to be overseas the two weeks before our wedding, because I’d already planned to go. I was in the Philippines, and we were faxing each other about wedding plans. I came back home two days before rehearsal. It was a little crazy to do in five weeks, but it was good. Our churches were so excited.

You’ve taught for years on evangelism and discipleship. So, how did you come to know the Lord?

I had a 12-year-old classmate when I was in seventh grade share the gospel with me. It was a middle school boy who was pretty obnoxious in his evangelistic tactic. I mean, he was just in my face every day. But the Lord used him to draw me to Himself. He loved me enough to tell me that I was going to hell, which was probably what I needed to hear because I knew nothing. I wasn’t raised in a Christian home. I needed clarity, and I needed forcefulness. He brought both of those even as a 12-year-old. When did you know that you were called into vocational ministry?

The day I got saved. I sensed and heard for myself these words: “I want you to preach my Word.” Those words were so clear to me they have never wavered in four plus decades. I’d wanted to be a teacher since I was in kindergarten, and so it was confusing to me for a while. I knew how much I wanted to teach and yet at the same time, I knew how clearly God had called me to preach. What I didn’t know for some time actually was that you could do both. You can preach and teach, and that’s what the Lord lets me do now–preach on Sundays, teach during the week, and train missionaries. It’s a pretty sweet position to be in at this stage of my life.

How do you feel like Southeastern plays a role in helping you and those you teach fulfill the Great Commission?

I came here because the Great Commission is in the DNA of this institution. I wanted to help keep that DNA in the institution and help increase students’ fire for the nations. I knew that I would be welcomed in doing that. Southeastern is known for being the school with that heartbeat, and I’m grateful for that because it’s very much my heart too.

What’s some of the best ministry advice you’ve received that has stayed with you through the years?

I had dinner with Robert Coleman 20 plus years ago, the author of “The Master Plan of Evangelism.” He had with him a student because every place he went he was always equipping a student. He had spoken at Southern Seminary in a Doctor of Ministry class, and I was privileged to take him and his student out for dinner. He challenged me then that if I wanted my ministry to continue beyond me, I needed to invest in students the rest of my life. That’s what I’ve tried to do. I look around the room and see photos of guys that I’ve been able to invest in, and I’m really grateful for Dr. Coleman to give me those words.

What has the Lord been teaching you lately?

Particularly as I take on the interim pastorate at Wake Crossroads Baptist Church, I’m being continually reminded of the reality of grace. I may be 60 years old, and I’ve done this for a long time, but the only reason I get to do anything is because of God’s grace. The only reason anything I do has any positive effect at all is because of God’s grace. He forgives my sin, drops it to the bottom of the ocean, and renews his mercies for me every day, and I get to serve him another day.

This article has been edited for length and clarity. 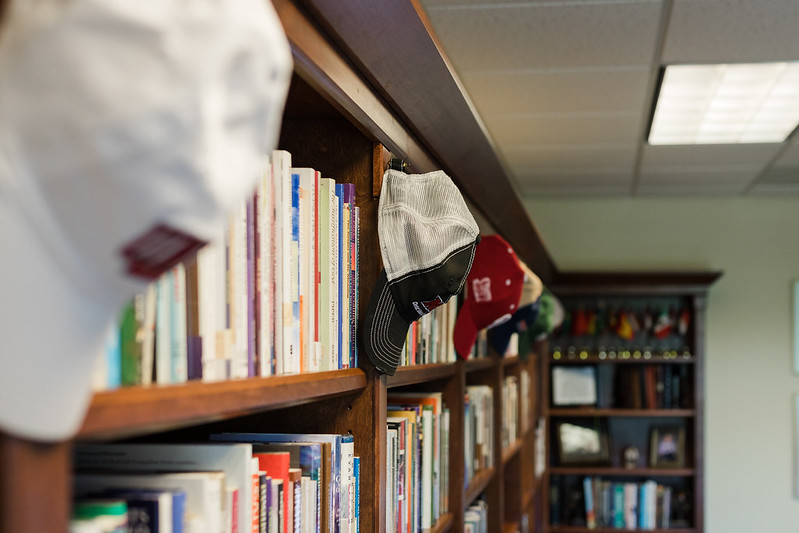